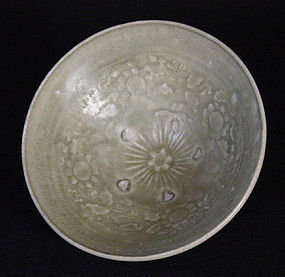 Please refer to our stock # YA-61 when inquiring.
Click to view additional online photographs

Connical-shaped ceramic bowl with impressed floral patten on interior. Vietnam, ca. 14th-17th C. H.2.375" x Dia.6.75"(17cm.) Similar wares were made in the 1th-16th Centuries in the region of current-day Hanoi and Hai Hung Province that have been excavated in Thailand. Vietnam has had a large ceramics industry serving both domestic and export markets for much of it history. There has been considerable influence from China at various times, but it has also developed a separate tradition. What is known as An nan (Annam) ware was highly prized among tea masters in 16th-17th Japan. This refers to the region of northern Vietnam that was under varying levels of Chinese subjugation from 111 BCE to 939 CE. An Nam means “Pacified South.” In addition, many examples of finely produced export ware from Vietnam are a result of the Hoi An wreck, recovered in 1996, which brought up over 250,000 pieces believed to have been made mostly in the kilns of the Red River Delta region in the mid-late 15th C. These wares were made primarily for export.