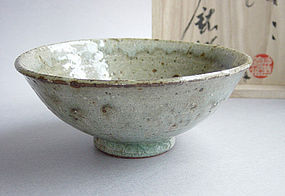 Tea Bowl, Matcha Chawan (in Korean, Cha Jya,) by Shin Hyun-Chul, ca. 1995. H.2.5"(6cm) x Dia.5.5"(14.5cm.) A classic example of natsu jawan (summer tea bowl) with a low, and wide profile. Accompanied by signed wooden box. Shin Hyun-Chul is a Korean potter who is well-respected by tea ware connoiseurs in Japan. His work is also shown in, of course, Korea, and has been exhibited in NY and LA in the U.S. The early tea masters, such as Rikyu, created a Japanese aesthetic for tea which prized the austere and simple elements of what came to be known as wabi-sabi. The pottery that inspired this aesthetic was actually the simple funcational wares of Korean farmers and commoners. Korean potters had been (forcibly) brought to Japan via the Shogun Hideyoshi's invasions into the Korean Peninsula. The result was a corps of talented artisans working for various fuedal domains. This was especially in Kyushu, but also in the ancient capital of Kyoto where tea culture was flourishing. This piece is a fine example of the continued strength of Korean ceramics as well as a true example of the inspiration for the wabi aesthetic.