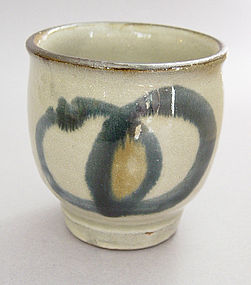 Tea Cup, yunomi, by Nakamura Masahiro, Tsuboya-yaki, Okinawa. ca. 2000. H.3"(7.5cm) x Dia.2.75"(7cm.) White glaze with two overlapping circles in blue, the intersection filled in with yellow glaze. Tsuboya wares are divided into joyachi (glazed) and arayachi (unglazed) wares, which also served different functions (large unglazed storage vessels, smaller glazed personal items such as bowls, plates, cups, etc.) The Tsuboya pottery district in today's Naha City began in 1682 when Okinawa's three pottery districts--Chibana, Wakuta, and Takaraguchi--were integrated into Tsuboya by royal decree of the Ryukyuan empire to accommodate increased demand for locally produced pottery. The name Tsuboya was given to the district in this historical event. In the Okinawan dialect, "Tsubo" means pot and "Ya" means specialists. In 1868, when Japan's Meiji Government established prefectures and Okinawa's feudal government was established, Tsuboya kilns that had previously been administered by the royal government came to be managed privately. Initially, cheaper mainlain porcelains from Seto came to replace the local Tsuboya wares and production decreased dramatically. However, in the early and mid-1900's visits by Folk Craft Movement leaders such as Yanagi Soetsu and Hamada Shoji exposed the mingei beauty of Okinawan crafts to the rest of Japan and to the world. They were greatly impressed by the fact that Tsuboya artisans still cherished the traditional techniques of manufacturing even while the market was being negatively impacted by the importation of Japanese porcelain. This positive reevaluation by the folkcraft movement helped in the regaining of confidence and pride by the Tsuboya potters. Through the years, in spite of the importation of cheaper goods, the total destruction caused by World War II, and modernization, Tsuboya has overcome many obstacles and still remains famous on Okinawa as the center of pottery and tsuboya-yaki is viewed as a quality art form throughout the world. Hamada himself, came to appreciate the Okinawan pottery environment so much that he spent many winters there alternating his pottery work between there and Mashiko.