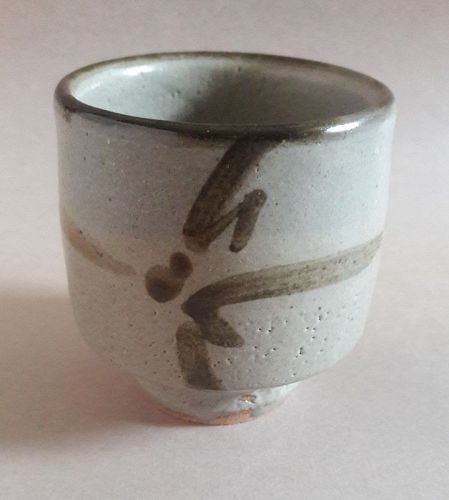 Yunomi, Tea Cup; by Isamu Tagami of Hinata Kiln, Mashiko. Nami Jiro white glaze with brushwork of bamboo on snow pattern. H.3.25"(8.25cm) x Dia.3"(7.75c.) Volume=7oz(210cc.) Tagami Isamu was born in 1947 in Mooka, a village neighboring to Mashiko. He married into the Sudo family and apprenticed under Sudo Takeo. He was originally trained as a Japanese chef and had his own restaurant before embarking on a career in pottery, giving him a unique perspective on functional wares. He is currently the 4th-generation head of Hinatagama, founded in Mashiko by Sudo Yujiro in the Meiji Period (1868-1912.) His work has won awards in Prefectural and National ceramic exhibitions as he continues his work in the use of traditional and local Mashiko clay and glazes, much in the same way that his father’s teacher, Hamada Shoji, did. Hinatagama (Hinata Kiln) was established in Mashiko by Sudo Yujiro during the Meiji Period (1868-1912.) Sudo Yujiro was a potter at the Jishoji-yaki kilns in Gumma Prefecture. Production at the Jishoji-yaki kilns had declined at the turn of the century and many potters relocated to Mashiko around 1905. In the kiln’s 2nd generation, under Sudo Yasutaro, there was considerable growth in Mashiko’s pottery industry and Hinatagama was a large kiln employing several craftsmen. This was also the period marked by the arrival of Hamada Shoji in Mashiko, who was to have a profound influence on this small folk pottery village, and Hinatagama itself. Folk wares, like Mashiko-yaki, were falling out of fashion technically and aesthetically, and the Mingei (Folk Craft) Movement; led by Yanagi Soetsu and potters like Hamada Shoji, Kawai Kanjiro, and Bernard Leach, ushered in a new era of individual studio artists who were inspired by folk craft, and who incorporated folk craft aesthetics into their work. Yasutaro’s son, Takeo, and Hamada’s 3rd son, Atsuya, were close friends who played together daily. Takeo eventually became an apprentice of Hamada Shoji, who by this time had been designated a National Living Treasure, and worked at the Hamada kiln. Afterwards, Hamada helped Takeo establish his own kiln directly in front of his own (the present-day site of the Hamada Sankokan Museum) and this is still the current site of Hinatagama today. Continuing as the 3rd generation of his family potting in Mashiko, Sudo Takeo (1931-1998) gained considerable recognition for his work as a Mashiko potter; representing Tochigi Prefecture abroad, having numerous exhibitions in Mashiko and Tokyo, training several future generations of Japanese and International potters, and having his vase featuring the traditional Mashiko kaki (persimmon) glaze presented to Crown Princess Masako in 1993. Hinatagama is currently operated by 4th and 5th generation potters, Tagami Isamu (Sudo Takeo’s son-in-law) and Tagami Munetoshi (grandson of Sudo Takeo,) who continue not only the pottery traditions of their family, but also the tradition of folk pottery in Mashiko.