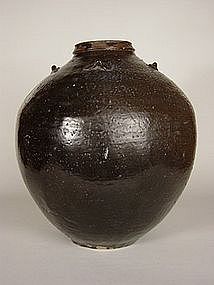 Please refer to our stock # YA-33 when inquiring.
Click to view additional online photographs

Tea leaf storage jars used in Japan like this were produced in and out of Japan from about the 15th century onwards. I wish I could say that this is one of the famous Muromachi Era "nanban" wares from the Phillipines or Southern China that are so prized by Japanese tea ware collectors, but it is one of the replica items made up through the Meiji Era in Seto, Japan. Still, the Japanese kept the traditional shape and produced many fine chatsubo in their own right. H.38cm (15") Body Dia.35cm(13.75".) This one features the four lug ears on the shoulders of the jar, and a dark brown glaze. Excellent as a large, dramatic vase for flowers and branches.