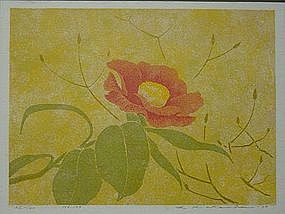 A framed silkscreen print by Japanese artist, Yukio Katsuda. Titled "No. 106" showing a botanical scene of a camellia. Signed and dated, 1977, #25 of an edition of 100. Image Size: H.6.5 x W.8.75", Frame Size: H.11.25 x W.14.25". Yukio Katsuda (born 1941) is a modern printmaker who works in the medium of silkscreen. His major themes are oriented to nature; landscapes, animals, birds, and botanical studies. His images are heavily inked, giving them a rich texture and deeply dimensional appearance. He has worked and exhibited widely in both Japan and the U.S., now living in his hometown of Kyoto. His works are titled with numbers, in chronological order of their completion during his career.