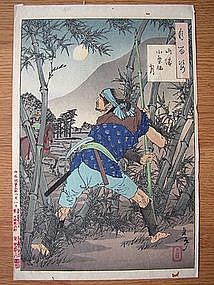 Please refer to our stock # BB-008 when inquiring.
Click to view online photographs

Artist: Tsukioka Yoshitoshi, 1839-1892. Title: The Moon of Ogurusu in Yamashiro (yamashiro ogurusu no tsuki). Series: One Hundred Aspects of the Moon (tsuki hyaku shi). Signature: Yoshitoshi. Artist's Seal: Taiso. Engraver's Seal: Enkatsu. Publisher: Akiyama Buemon. Date: Meiji 19 (1886), 2nd month, 1st day. Format: oban tate-e, (Image) H.13 x W.8.875". Condition: Very good colors and impression. Four minor worm holes in margin (2 top, 2 bottom,) 2 tiny dots of red ink in center of print, album backing. Akechi Mitsuhide assassinated Shogun Oda Nobunaga in June of 1582. But, fleeing the revenging forces of Nobunaga supporter, Toyotomi Hideyoshi, the self-proclaimed shogun of just 13 days was ambushed by peasants outside the village of Ogurusu in Mitsuhide's home province of Yamashiro. Here, one of the peasants waits in a thicket of bamboo, armed with a homemade bamboo spear, a farmer's sickle, and poking down though his sash is what appears to be the scabbard of a sword, undoubtedly that of another vanquished samurai. [Ref: Stevenson, #19]. Tsukioka Yoshitoshi, 1839-1892 His given name was Yonejiro, and he became a student of the great ukiyo-e artist, Kuniyoshi, at the age of eleven. In 1853, the same year that Commodore Perry’s fleet arrived in Japan, Yoshitoshi composed his first woodblock print, a triptych of the Minamoto and Taira naval battle at Dannoura. His life and prints often mirrored the political turmoil and cultural upheaval besieging Japan in the late 1800's. He is often remembered by his prints featuring bloody and gruesome scenes. However, one of his last series, “One Hundred Aspects of the Moon,” also showed the artist’s talent and innovation. The Moon series exhibited not only technical skill and artistic creativity, but also the pinnacle of Yoshitoshi’s career in terms of emotional maturity. An excellent resource for information on the Moon series, and on the life of Yoshitoshi, is John Stevenson’s “Yoshitoshi’s One Hundred Aspects of the Moon” (Hotei Publishing, 2001.)