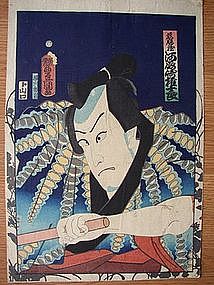 Please refer to our stock # BB-003 when inquiring.
Click to view online photographs

Utagawa Kunisada [Toyokuni III] (1786-1864). Subject: Yakusha-e, Kabuki actor print; Kawarazaki Gonjurou (stage name of Ichikawa Danjurou IX [1838-1903] from 9/1852 to 2/1869).Signature: “ki-o Toyokuni ga” in red toshidama cartouche. Engraver Seal: Yokogawa. Censor Seal: “aratame” (examined), year of the cock (1861) 9th month. Publisher: Yamaguchi-ya Toubei. Date: 1861. Format: oban tate-e, H.13.75 x W.9". Comments: “kirazuri” mica powder giving sheen to dark blue background on upper one third of print. Printing in margins. Condition: Very good colors and impression, no album backing, minor back repairs to small pin & worm holes. Utagawa Kunisada, 1786-1864 (Toyokuni III). Kunisada was probably one of the most successful Japanese print artists in history. During his lifetime, his estimated output of print designs numbers over 20,000; and this time also saw probably the peak (in terms of “quantity,” but some may argue not “quality”) of woodblock print production, commercial distribution, and public popularity in Japan. Kunisada, himself, enjoyed much more success and popularity than some artists who are better known in the West today; Kunoyoshi, Hiroshige, and Hokusai to name a few. His career experienced continual success from early on in his career, after apprenticing in the school of the well-known Utagawa Toyokuni (1769-1825) from about the year 1800. His first works began to appear in 1807, and he was given the name Kunisada (in the tradition of using the last character of his teacher’s name, Toyokuni.) His popularity grew with his steady production of kabuki actor prints; but he also created bijin-ga, landscapes, & shunga. He also produced collaborative works with some of his contemporaries, like Kuniyoshi and Hiroshige. In 1844, he took on his former teacher’s name of Toyokuni, although this was well after his death in 1825, and that of his successor, Toyoshige (Toyokuni II) who died in 1835. He had many students, reportedly sometimes as many as sixty, some of the better known being Kunichika and Chikanobu. They are many resources for information on Kunisada, but two recommended ones for a good background on the man, his work, and the Ukiyo-e environment in the late Edo period are Sebastian Izzard’s “Kunisada’s World” (NY: Japan Society, 1993) and Ellis Tinios’ “Mirror of the Stage: The Actor Prints of Kunisada” (Leeds, UK: The University Gallery Leeds, 1996.) Also, an excellent and highly resourceful Internet site is Horst Graebner’s “Utagawa Kunisada Project.”