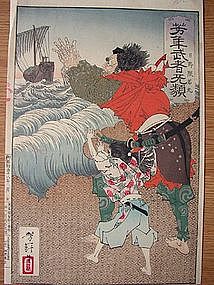 Please refer to our stock # BB-006 when inquiring.
Click to view online photographs

Artist: Tsukioka Yoshitoshi (1839-1892). Subject: Musha-e (Warrior print); “Yoshitoshi Musha Burui” (Yoshitoshi’s Courageous Warriors): Young Hino Wakamaru (after revenging his father’s death) and the “yamabushi” (mountain priest) escaping from Sado Island”, #14 in this series of 33. Signature: “Yoshitoshi hitsu” (from the brush of Yoshitoshi). Artist’s Seal: Taiso. Engraver: Horikou Muneoka. Publisher: Tsunajima Kanekichi. Date: Meiji 18 (1885.) Format: oban tate-e, H.13.125 x W. 8.75". Condition: Very good colors and impression. Small area of red color (transferred from opposing print in album?) on upper left margin and image. Retains album backing, margins slightly trimmed on left side & bottom - but image completely intact, album crease along left margin. No holes or tears, overall very good condition. Comments: “Karazuri” embossing in a fish net pattern on the inside of the young boy’s kimono sleeve. Republished series of first edition published by Kobayashi Tetsujiro in 1883. The "Musha Burui" series was a transitional one for Yoshitoshi, prior to his more contemplative "Moon" series. There is some violence and action depicted in "Courageous Warriors" but not to the extent of violence and bloodshed in earlier works. Most show a single moment & mood of a historic event. Tsukioka Yoshitoshi, 1839-1892 His given name was Yonejiro, and he became a student of the great ukiyo-e artist, Kuniyoshi, at the age of eleven. In 1853, the same year that Commodore Perry’s fleet arrived in Japan, Yoshitoshi composed his first woodblock print, a triptych of the Minamoto and Taira naval battle at Dannoura. His life and prints often mirrored the political turmoil and cultural upheaval besieging Japan in the late 1800's. He is often remembered by his prints featuring bloody and gruesome scenes. However, one of his last series, “One Hundred Aspects of the Moon,” also showed the artist’s talent and innovation. The Moon series exhibited not only technical skill and artistic creativity, but also the pinnacle of Yoshitoshi’s career in terms of emotional maturity. An excellent resource for information on the Moon series, and on the life of Yoshitoshi, is John Stevenson’s “Yoshitoshi’s One Hundred Aspects of the Moon” (Hotei Publishing, 2001.)