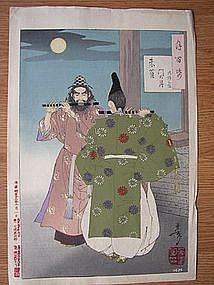 Please refer to our stock # BB-011 when inquiring.
Click to view online photographs

Suzaku Gate Moon - Hakuga Sammi (Suzakumon no tsuki - Hakuga Sammi). Printed: 1st day. 2nd month. 1886 Engraver: Yamamoto Signature: Yoshitoshi. Seal: Yoshitoshi no in. Publisher: Akiyama Buemon Condition: Very Good colors & impression, full margins, "karazuri" embossing on cartouche & Hakuga's hakama (pantaloons). H. 13 x W. 8.75". Minamoto no Hiromasa (918-980,) was also known as Hakuga Sammi. He was the grandson of Emperor Daigo, and a famous musician, equally proficient on the lute, biwa, and flute. He was the student of the most famous musician of the day, the blind Semimaru. The story of Hiromasa often standing outside Semimaru’s garden, listening and trying to discover the secret of his future teacher’s beautiful playing became a Noh dance. Here, Hiromasa is show playing a duet on the yokobue (side flute)with an unidentified visitor on a quiet moonlit night beneath the Suzakumon, the main gate of the Daidairi, the “Great Enclosure,” which contained the Imperial Palace and government offices.( The demon of the print with Tsunenobu lived in its rafters.) Hiromasa is dressed in robes with a chrysanthemum pattern and the black hat of a Heian courtier. His partner’s strange hat, heavy beard, and unusual robes with phoenix design indicate a foreigner, possibly from central Asia. How they met we do not know, and the scene may be entirely a product of Yoshitoshi’s imagination. [Stevenson,#20] Tsukioka Yoshitoshi, 1839-1892. His given name was Yonejiro, and he became a student of the great ukiyo-e artist, Kuniyoshi, at the age of eleven. In 1853, the same year that Commodore Perry’s fleet arrived in Japan, Yoshitoshi composed his first woodblock print, a triptych of the Minamoto and Taira naval battle at Dannoura. His life and prints often mirrored the political turmoil and cultural upheaval besieging Japan in the late 1800's. He is often remembered by his prints featuring bloody and gruesome scenes. However, one of his last series, “One Hundred Aspects of the Moon,” also showed the artist’s talent and innovation. The Moon series exhibited not only technical skill and artistic creativity, but also the pinnacle of Yoshitoshi’s career in terms of emotional maturity. An excellent resource for information on the Moon series, and on the life of Yoshitoshi, is John Stevenson’s “Yoshitoshi’s One Hundred Aspects of the Moon” (Hotei Publishing, 2001.)