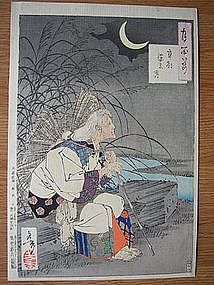 Please refer to our stock # BB-012 when inquiring.
Click to view online photographs

Gravemarker Moon (Sotouba no tsuki). Printed: 3.1886 Engraver: Yamamoto Signature & Seal: Yositoshi Publisher: Akiyama Buemon. Condition: Very Good colors and impression, full margins. "karazuri" embossing on Ono no Komachi's robes. Format: Oban tate-e: H.13 x W. 8.75". Ono no Komachi was a famous beauty and poetess of the 9th century. Episodes from her life became the basis of a set of seven Noh plays, the last group called Sotouba Komachi, “Gravemarker Komachi.” Here, seated on the gravemarker, she remembers being courted in her youth and her cruelty to suitors. She had been blessed with beauty, a strong personality, and a brilliant intellect. She was the idol of the court, but became arrogant. One of her lovers, a captain of the imperial guards, was made to prove his ardor by waiting outside her door for one hundred days. He survived the first ninety-nine, but was found frozen to death on the hundredth. The suffering she endured at the end of her life is seen as penance for her heartlessness. The melancholy of one of Komachi’s poems foretells her situation: the flowers’ beauty faded but no one cared / I watched myself grow old in the world / as the long rains fell. Although she still retains an image of intelligence and beauty in this prin;, her battered straw hat, her gravemarker throne, and the waning moon reveal her current condition. [ref: Stevenson, #25]. Tsukioka Yoshitoshi, 1839-1892. His given name was Yonejiro, and he became a student of the great ukiyo-e artist, Kuniyoshi, at the age of eleven. In 1853, the same year that Commodore Perry’s fleet arrived in Japan, Yoshitoshi composed his first woodblock print, a triptych of the Minamoto and Taira naval battle at Dannoura. His life and prints often mirrored the political turmoil and cultural upheaval besieging Japan in the late 1800's. He is often remembered by his prints featuring bloody and gruesome scenes. However, one of his last series, “One Hundred Aspects of the Moon,” also showed the artist’s talent and innovation. The Moon series exhibited not only technical skill and artistic creativity, but also the pinnacle of Yoshitoshi’s career in terms of emotional maturity. An excellent resource for information on the Moon series, and on the life of Yoshitoshi, is John Stevenson’s “Yoshitoshi’s One Hundred Aspects of the Moon” (Hotei Publishing, 2001.)