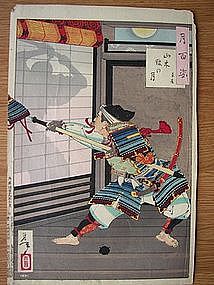 Please refer to our stock # BB-013 when inquiring.
Click to view online photographs

The Moon of Yamaki Mansion - Kagekado (Yamaki Yakata no Tsuki - Kagekado). Printed: 3.1886. Engraver: Enkatsu. Signature: Yoshitoshi. Seal: Taiso. Publisher: Akiyama Buemon. Format: Oban tate-e. H.12.75 x W. 8.75". Condition: Good Impression and colors. Some soiling, including an ink spot (from original printing?) on the lower portion of print. Slight margin trimming. "Karazuri" embossing on Kagekado's clothing and cartouche. Faux woodgrain on panel behind Kagekado. Katou Kagekado was a retainer of Yoritomo, leader of the Minamoto clan. Their long campaign against the Taira clan began with this attack on the Yamaki mansion, home of Yoritomo’s bitter enemy, Taira no Kanetaka. This took place on a full moon night, the 16th night of the 8th lunar month of 1180. In this scene, Kagekado, sent by Yoritomo, cleverly balances his helmet on his spear outside the door of Kanetaka, whose huge shadow can be seen in the moonlit paper of the sliding fusuma door. Attacking the helmet, Kanetaka is easily dispatched and then decapitated by Kagekado, who then lights the paper door afire signaling victory to Yoritomo’s waiting troops. Yoritomo eventually became shogun, and was succeeded by his son Sanetomo, whom Kagekado also served. When Sanetomo was assassinated in 1219, Kagekado became a monk. The root of the character kage means “shadow,” and the sound of Kagekado’s name (not the literal translation) could mean “the shadow in the corner.” A shadow is an important part of the design, and this element would echo in the mind of a Japanese viewer of the print. [ref: Stevenson, #27]. Tsukioka Yoshitoshi, 1839-1892. His given name was Yonejiro, and he became a student of the great ukiyo-e artist, Kuniyoshi, at the age of eleven. In 1853, the same year that Commodore Perry’s fleet arrived in Japan, Yoshitoshi composed his first woodblock print, a triptych of the Minamoto and Taira naval battle at Dannoura. His life and prints often mirrored the political turmoil and cultural upheaval besieging Japan in the late 1800's. He is often remembered by his prints featuring bloody and gruesome scenes. However, one of his last series, “One Hundred Aspects of the Moon,” also showed the artist’s talent and innovation. The Moon series exhibited not only technical skill and artistic creativity, but also the pinnacle of Yoshitoshi’s career in terms of emotional maturity. An excellent resource for information on the Moon series, and on the life of Yoshitoshi, is John Stevenson’s “Yoshitoshi’s One Hundred Aspects of the Moon” (Hotei Publishing, 2001.)