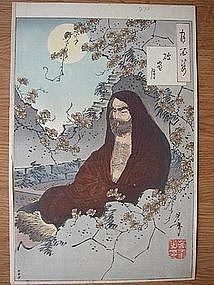 Please refer to our stock # BB-015 when inquiring.
Click to view online photographs

The Moon Through a Crumbling Window. (Hasou no Tsuki). Printed: 1st day. 2nd month. 1886. Engraver: Yamamoto. Signature: Yoshitoshi. Seal: Yoshitoshi no in. Publisher: Akiyama Buemon. Format: Oban tate-e: H.13 x W. 8.75". Condition: Good Impression & Colors. Light soiling to bottom of print. Retains album backing. Margins trimmed, and left margin covered by album attachment. Images of Bodhidharma (Daruma in Japanese,) patriarch of Zen Buddhism, have come to epitomize the discipline and austerity of Zen. A thousand years after the historical Buddha, this Indian prince left his home and traveled to China, and at a Shaolin temple outside of Luoyang he meditated facing a cave wall for nine years. Legend has it that he was so angered at himself for falling asleep while meditating that he cut off his eyelids, which cast to the ground became the first tea plants. And, after long years of seated meditation, his legs withered away, inspiring the Japanese folk art Daruma dolls that always right themselves up when pushed over. The sou in the title means window, and refers to the window of enlightenment opening in Daruma’s awareness, as well as to the crumbling wall around him. There is also an allusion to ensou, the Zen circle of emptiness, a central quality of enlightenment. The 18th century poem asks: “what are 9 years? 10 years in the suffering world dressed in a flower robe”, and suggests that the much-praised sufferings of Daruma are no more significant than those of a courtesan, who typically had to serve out her contracted bondage to a brothel for ten years. [Ref: Stevenson, #30.] Tsukioka Yoshitoshi, 1839-1892. His given name was Yonejiro, and he became a student of the great ukiyo-e artist, Kuniyoshi, at the age of eleven. In 1853, the same year that Commodore Perry’s fleet arrived in Japan, Yoshitoshi composed his first woodblock print, a triptych of the Minamoto and Taira naval battle at Dannoura. His life and prints often mirrored the political turmoil and cultural upheaval besieging Japan in the late 1800's. He is often remembered by his prints featuring bloody and gruesome scenes. However, one of his last series, “One Hundred Aspects of the Moon,” also showed the artist’s talent and innovation. The Moon series exhibited not only technical skill and artistic creativity, but also the pinnacle of Yoshitoshi’s career in terms of emotional maturity. An excellent resource for information on the Moon series, and on the life of Yoshitoshi, is John Stevenson’s “Yoshitoshi’s One Hundred Aspects of the Moon” (Hotei Publishing, 2001.)