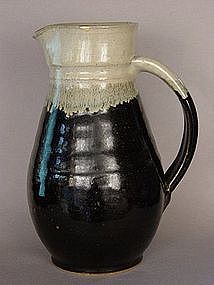 Mashiko ware black glaze pitcher. H. 10" x Body Dia. 6". Small chip on rim repaired in lacquer & synthetic gold. Purchased in 1965. Mashiko wares from Tochigi Prefecture have gained a worldwide reputation since potter Shoji Hamada settled there in 1923. It's been said that such handles as the one seen on this piece, and not typically Japanese, were introduced by Hamada and by Bernard Leach into Mashiko and other pottery Japanese pottery towns. This is a fine example of such a western form produced with a rich Mashiko-guro (Mashiko black) and Namijiro (Regular Mashiko White) glazes.