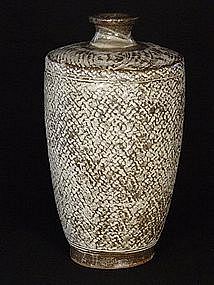 Mashiko ware Vase by local potter Outsuka Sadao. Impressed Inlay Patterning. H. 12.75" x Body Dia. 6.5". Stamped at foot "Sada". Purchased in 1965. Good condition, holds water - tested. Condition notes: you can see in enlargement #2 that the vase has a lean/list to one side. Also, there is a "kamakizu" (kiln scar) of a small rock burst on the body. These are imperfections that may make the piece more attractive to some, and less attractive to others. There are several branches of the Outsuka family still carrying on pottery operations today, and the founding potter of Mashiko in the mid-19th century also carried this name. While the town made strictly utilitarian wares such as water jars and grinding bowls in the ealy years, studio and art pottery (while still much of it functional) wares became the norm in the mid-20th century until today. Reportedly there are over 400 kilns in operation now, making it one of the largest pottery regions in the world. The arrival and popularity of potter Shoji Hamada in the 1920's has created a mecca of sorts for potters interested in "mingei" folk craft -inspired work, as well as work that is freer in creativity. Outsuka Sadao previously worked at a relative's kiln making Mashiko table wares, but around this time became an independent studio potter and created wares such as this vase.