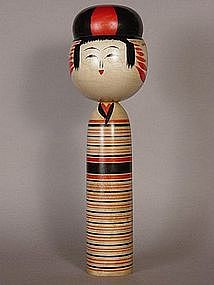 Kokeshi, folk toy of NE Japan. Wood, Height 9.875". Tougatta-kei, Miyagi Prefecture. Although of the Tougatta classification, the maker, Umiya Yoshiemon (Umitani Kichiemon?) lived in Sendai City. He was born in the 38th year of the Meiji Era (1905) and passed away on April 20th, 1985 at the age of 79. This particular kokeshi probably dates from the 1970's or earlier. The "bun" haristyle is an interesting feature of this kokeshi, which also appears on some other Tougatta style dolls.