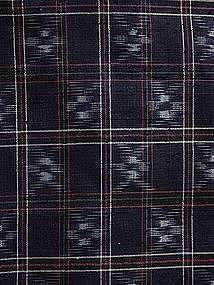 Kasuri Kimono "te-ui ai ji e-gasuri koushigara kimono" (Hand-woven indigo dye picture ikat lattice [checked] pattern kimono.) Yanagi Yoshitaka (7.25.1911 ~ 8.20.2003) Cotton, ikat weave. L.60 x W.48” ca. 1955 Yanagi Yoshitaka was a well-known Japanese weaver and textile educator. He was the nephew of Folk Craft Movement (Mingei Undou) founder Yanagi Soetsu, and was a founding member of Shin-Kougei Bu (New Crafts Club) along with his uncle and the potter Hamada Shoji. His entire life was dedicated to crafts. His work was widely exhibited in Japan from the early 1930’s, and one of his last showings before his passing in 2003 was at the Blackwell Artistic House in England in 2001. He was associated with Joshi Bijutsu University in Tokyo from 1949 on, holding positions ranking from Instructor to Director of the Art School to President (1975-1983). In the pre-war years, he had accompanied Yanagi Soetsu and others on research trips to Okinawa. He later returned, and from 1987 to 1990 was a research professor at the Okinawa Prefectural Art University. He published papers and books on Okinawan textiles including “Okinawa no Orimono” (Weaving of Okinawa), Kougei Senshoku no To” (The Craft of Textile Dyeing), and “Bashoufu” (Banana Plant Fiber Textiles). This kimono was authenticated by his daughter, and is a very rare example of his work shown outside of Japan.