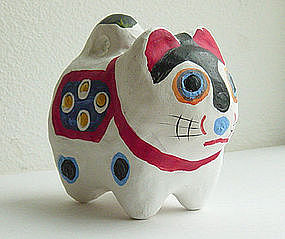 Saitama Inu Hariko: painted paper; H.3" x L.3.5"; contemporary; Saitama Prefecture. The dog in Japanese folk lore symbolizes many things. This one can be a talisman for easy child birth (as dogs experience) and as a protector of children. Dogs in general are symbols of protection and loyalty, and also have the ability to recognize demons (and other animals such as fox and tanuki) in human form. The techinique of “hariko” (papier-mache) is said to have come to Japan from China during the Muromachi Period (1333-1568.) The making of hariko dolls, masks, and other folk toys was an industry that saw great growth during the Edo Period (1600-1868) due to an increase in regional travel by samurai retinue and government officials from outlying castle towns to and from the capitol in Edo. This was especially true in areas where paper manufacturing was already established, and where the raw materials (proper woods such as mulberry; and clean cold running water) where readily available. Saitama Prefecture, just NW of Tokyo, has produced several types of hariko items such as Daruma and animals since the Edo Period.