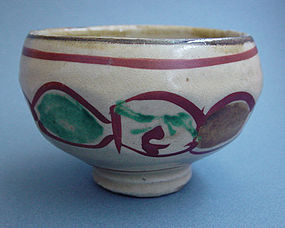 Hamada Shoji saku (made by Shoji Hamada,) Ryuukyuu Kamado (Okinawa Kiln,) Aka-e Chawan (Red overglaze enamel Tea Bowl,) 1972. H. 3”(7.75cm) x Dia. 4.5”(11.5cm.) Footring diameter 2”(5cm.) Weight 13.5oz(384g.) Signed wooden box included. Okinawan motif and color palette (red, green, ochre on white background) on bowl with 9 facets around (see enlargement #2, bottom view.) Small areas of glaze loss around rim (see enlargement photos & comments below) measuring from 30mm to 2.5cm in length. More images available on request. Identification and evaluation was done by Hamada Shinsaku, as well as the creation and signing of a custom-made wooden box for the bowl. Translation of Evaluation : “This bowl was made by hand at Tsuboya, Okinawa by Shoji Hamada and brought to Mashiko to complete firing at Hamada Shoji’s “aka-e” (red overglaze enamel) kiln there. Around the rim, there are some small areas of glaze loss, but this is not a problem. It is a very fine piece.” This bowl has an excellent provenance with photos taken on the day of acquisition at Hamada Shoji’s Mashiko compound on August 25, 1972. Photos include selection of the bowl, and an image of Hamada-san (back view) in front of his workshop. These photos are available to the buyer. The bowl has had only one owner since then. Based on Hamada Shoji’s practice of occasionally potting in Okinawa during the winter months, the bowl would have been started in early 1972, and the photos indicate a “kamadashi” kiln opening showing completion in August of 1972. Abundant biography information of Hamada is available from various resources. Here are some highlights from his life: Born December 9, 1894 – Died January 5, 1978. He attended the Tokyo Insitute of Technology and studied pottery under Itaya Hazan. It was during this time that he experienced the simple beauty of a Mashiko tea pot with a landscape design (Mashiko sansui dobin) that would later influence him to establish his pottery in the town of Mashiko. He went to work in England with his friend Bernard Leach in 1920, helping Leach establish his kiln at Cornwall – St. Ives. Shortly after his return to Japan, he established his own kiln in Mashiko in 1923. He was a key figure among the first generation members of the Mingei, or “Folk Craft,” Movement in Japan and was influential in the promotion of this aesthetic worldwide. On January 10, 1926, along with Mingei Movement founder and leader, Yanagi Soetsu (1889-1961) and fellow potter Kawai Kanjiro (1890-1966;) they formulated the word “mingei” (from minshuuteki kogei, “crafts of the people”) and set the Movement in motion with a declaration to establish a museum and movement to protect and promote folk crafts. After Yanagi’s death, Hamada was the 2nd Director of the Nihon Mingeikan (Japan Folk Crafts Museum) in Tokyo, from May of 1961 until December of 1977. In 1955, he and potter Tomimoto Kenkchi were the very first potters to be declared Ningen Kokuho (most commonly translated as “National Living Treasure,” but more accurately they are “Holders of Nationally Important Cultural Properties”) for his work in Folk Craft Pottery.