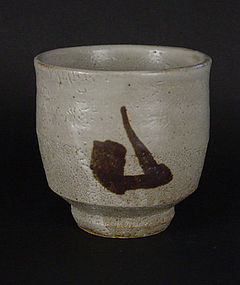 Yunomi, Tea Cup, by Hamada Shinsaku; Mashiko, Tochigi Prefecture. ca. 1990-1995. H.3.125"(7.75cm) x Dia.3"(7.5cm.) With signed wooden box. "Yunomi - Shinsaku." Hamada Shinsaku is the second son of National Living Treasure, Hamada Shoji and successor of the Hamada kiln. He is the father of Hamada Tomoo, who is currently gaining international popularity as representative of the 3rd generation of Hamada potters. Shinsaku was born in 1929 and apprenticed to his father to become a master potter highly influenced by the tradition and philosophy of mingei, folk craft, as espoused by Yanagi Soetsu, Hamada Shoji, Bernard Leach, and others. He also studied industrial design at Waseda University in Tokyo (1950) and worked briefly with Bernard Leach at St. Ives (1963.) His work is demonstrates a quiet, yet powerful, modern version of traditional Mashiko pottery. The town of Mashiko is located about 70 northwest of Tokyo, in Tochigi Prefecture. Although there is evidence of pottery manufacture in the region of Mashiko as far back as the 8th century; production in the modern age began in 1853, making it a relatively young pottery center by Japanese standards. However, whereas many traditional pottery towns disappeared when Japanese lifestyle changes made many functional clay items obsolete, Mashiko has survived and thrived as one of the largest pottery communities in the world. Much of this can be credited to life and work of Shoji Hamada, who decided to settle in this traditional clay village. Although he was a contemporary artist, he showed great respect for the work of traditional artisans, for the natural materials available from the region, and for the “Other Power of tradition.” He was a leading figure in the Japanese Folk Craft Movement, along with Soetsu Yanagi and others; such as potters Bernard Leach and Kanjiro Kawai, textile artist Keisuke Serizawa, and woodblock printer Shiko Munakata. Hamada was desginated as a National Living Treasure for his preservation of Mingei “Folk Craft” pottery and promoted an openess which led many to follow his path to Mashiko. Currently, there are some 400 kilns operating in and around Mashiko making a wide variety of wares; from traditional styles and patterns to modern artistic works.