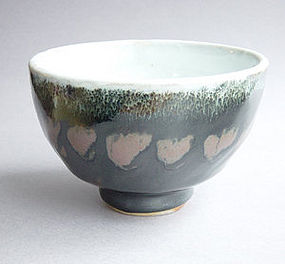 Tea Bowl, Matcha Chawan, by Lee Love of Mashiko (& now Minnesota.) H.3.5"(9cm) x Dia.5"(12.5cm.) Mashiko black (mashiko- guro,) white (nami-jiro,) and brown/persimmon (kaki) glazes. Gas-fired, ca. 2005. This Ido-gata (well-shaped) bowl was fired in Mashiko, Tochigi Prefecture, where Lee had completed a 3-year apprenticeship to National Living Treasure Shimaoka Tatsuzo. It features a lustrous Mashiko-guro (Mashiko Black) glaze highlighted by areas of the traditional kaki (persimmon) glaze widely used in Mashiko, and created from ground Oya stone, which is mined locally. The interior has a clean, white (nami-jiro) glaze. Lee Love was born in Osaka, Japan, and spent his early years is the neighborhood where legendary tea master Sen no Rikyu lived some 400 years earlier. Lee was raised mostly in Michigan but moved to Minnesota to study Zen, and eventually pottery. His commitment to this path led him to a 3-year apprenticeship at the kiln of Tatsuzo Shimaoka in Mashiko. After completing his work there, Lee established his own kiln in Mashiko and regularly exhibited his work in Japan and select exhibitions in the US. In 2008, he was awarded a McKnight Residency to return to Minnesota's Northern Clay Center. At the end of 2008, he made the decision to return to Minnesota permanently with his wife, Jean, who is an accomplished wood-block print artist. Currently, his work is shown in the Minneapolis area under the theme of "From Minnesota, to Mashiko, and back."