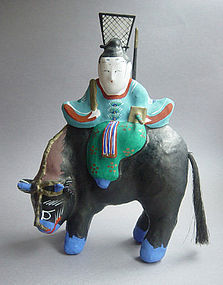 Miharu Hariko, Papier-mache doll; Miharu Village, Fukushima Prefecture, ca. 1987. H.9.5"(24cm) x W.6.5"(16.5cm.) Figure of Sugawara no Michizane; a politician, poet, and scholar (845-903.) Excellent condition. The story of Michizane (Tenjin-sama) is well-known in Japan. He was a politician and scholar in the ancient Imperial capitol of Kyoto. Through a series of political back-stabbing, he was banished to Dazaifu in remote Chikuzen Province (now part of Fukuoka Prefecture in Kyushu)where he sufferred a lonely death. His trip in an ox-pulled carriage often leads to depictions of him in connection with oxen. Subsequent bad luck that befell the Emperor's family as well as thunder storms in the capitol were blamed on the treatment of Michizane and the Kitano Tenmangu Shrine was built in Kyoto to make amends, and Michizane was enshrined as the diety "Tenjin-sama." For his scholarly and poetic abilities, he has now become the diety of scholarship and education at many Tenjin shrines around the country. It is not uncommon for students and their families to visit such shrines before the exams that are such a large part of the Japanese education system. Miharu-machi (town) is located just NW of Koriyama City in central Fukushima Prefecture. They say the town’s name “mi’ (3) “haru” (spring) comes from the fact that the three famous blossoms of spring; plum, peach, and cherry, bloom here in profusion. This colorful backdrop, along with a scenic rural setting, and a long craft history, help to provide the inspiration for the papier-mache dolls known as Miharu Ningyo (Miharu Dolls.) Over 300 years ago, the first ancestor of the Hashimoto family to settle in the region was Hashimoto Keibu, a samurai displaced by civil wars. His descendants began making Miharu Ningyo under the patronage of feudal lords during the Edo Period (1600-1868.) Similar in form and theme as the clay dolls produced a bit north at Tsutsumi in Sendai-han (Province) , Miharu Ningyo were instead made of scrap paper pressed over mountain willow wooden molds, then glued and hand painted. Such items were sold to the retinues of samurai and officials that were forced to travel to and from their outposts to the capital in Edo (Tokyo) under the Shogun’s “san kin kotai” (alternating residences) system. Souvenirs to take back to Tokyo were a must along the route. At the peak of the trade’s history in the 1700's some 30 families worked at this craft in Miharu, proding such items as Ebisu, Daikoku, &Daruma dolls. Today, there are about a dozen of the Hashimoto descendants continuing the tradition today at a collective of farm houses and gift shops known as Deko-Yashiki. Miharu artisans started out with paper because there were no good clay deposits in the area, but today say that paper actually creates a more lively, and expressive figurine than the stiffer, hardened clay. This can especially be seen in the dancing figures. Other standards are Ebisu, Daikoku, & Daruma dolls, as well as masks, and the popular zodiac animals. To meet the annual demand for the zodiac figures, work begins in the summer months and only a limited number of the following year’s animal is made, and released for sale at year’s end. But, loyal customers don’t mind the annual wait. Today’s dolls still use high quality hand-made paper of mulberry bark fibers, and are still hand-painted by the Hashimoto family descendants in this centuries old traditional folk craft. The techinique of “hariko” (papier-mache) is said to have come to Japan from China during the Muromachi Period (1333-1568.) The making of hariko dolls, masks, and other folk toys was an industry that saw great growth during the Edo Period (1600-1868) due to an increase in regional travel by samurai retinue and government officials from outlying castle towns to and from the capitol in Edo. This was especially true in areas where paper manufacturing was already established, and where the raw materials (proper woods such as mulberry; and clean cold running water) where readily available.