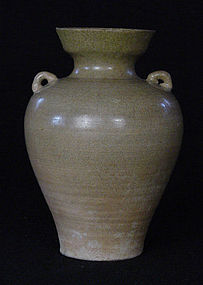 Please refer to our stock # YA-68 when inquiring.
Click to view additional online photographs

Vase from Sankampaeng, North-Central Thailand, ca. 14th-16th Century. Light brown glaze with 2 lug handles inserted at the shoulders. H.5.75"(14.5cm) x Dia.4"(10cm.) Excellent condition with small, indistinguishable repair to body of unknown date. The Sankampaeng kilns were a large manufacturing center of North-Central Thailand in the 14th-16th C. The old kilns were located around On Tai Village in Chiang Mai Province. The kilns of Central, Northern, & Western Thailand were active predominately in the 14th to 16th Centuries. Wares were made for local consumption as well as for export. The Thai kingdoms of the Central Plains and the Northern Mountains had access to the important trade routes to the west that eventually led to the Burmese seaports of Martaban and Moulmein on the southern Burmese coast at the mouth of the Salween River. These ports were active with both Buddhist travel routes to India as well as commercial trade to India, Persia, Arabia, China, and other parts of SE Asia. It was a “Maritime Silk Road.” However, the more delicate Khalong wares of Northern Thailand were made for domestic consumption among the regions of the northern Kingdoms. In 1579 when the Burmese launched a fatal attack on the Ayutthaya, both trade and kiln activity in all of these regions declined rapidly and eventually led to the near cessation of major ceramic production in Thailand. Knowledge and evidence of this ancient pottery tradition was minimal until excavation for road building in Western Thailand commenced in the 1970’s. By the 1980’s, a tremendous amount of artifacts were unearthed by hill tribe peoples in the region, looters, and academics who brought these wares to private and public collections for the first time.