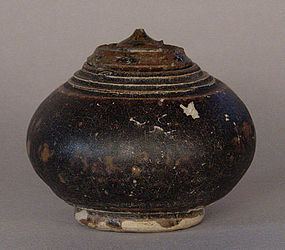 Please refer to our stock # YA-65 when inquiring.
Click to view additional online photographs

Ceramic Lime Pot with Lid for betel nut paraphernalia. Dark brown temmoku glaze. H.3"(7.5cm) x Dia.3.75"(9.5cm.) The lime pot was used in the practice of "betel nut chewing," as a container for the lime paste (made from limestone chalk, calcium carbonate,) sometimes mixed with cumin or turmeric in Thailand. This is placed on a Betel leaf (from the stalk of the Piper betle pepper plant,) and topped with shredded or sliced Areca Nut (Areca catechu, a member of the Palm family.) This style of pot with the dark brown temmoku glaze was widely made in the Angkorian Period of the Khmer Empire, which extended beyond present-day Cambodia into Thailand during the 11th-13th Centuries. Over 200 kiln mounds have been discovered in the villages of Ban Kruat and Ban Baranae, both in present-day Thailand's Buri Ram Province. Another possible provenance is the Sawankhaloke "Chaliang" ware from 14th-16th C Sisatchanalai in Thailand's Sukhothai Province, which used a similar temmoku glaze and made lime pots at many of the estimated 1,000 kilns in operation then. However, the typical shape of the Sawankhaloke lime pot was a tall, tapering cylinder. Both shape and glaze point to Angkorian period Khmer origins for this piece.