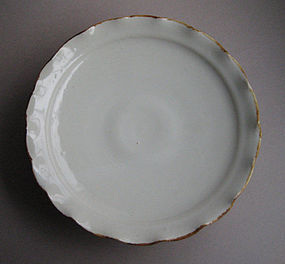 Porcelain Dishes, Mukozuke-shape or dessert/salad dishes, by Hanako Nakazato; Union, Maine and Karatsu, Japan. H. 1.5"(4cm) x Dia. 7.5"(19cm.) Scalloped rim gives the name of these dishes by Hanako, "Petal Mukozuke." These dishes are appropriate for most any savory or sweet food and are an excellent size for use as a mukozuke dish used in Japanese cuisine. Hanako Nakazato is a 14th generation potter from Japan. The Nakazato family is a well-known pottery family in Karatsu, Saga Prefecture, with the 12th generation Nakazato Taroemon being designated a National Living Treasure for Karatsu ceramics. Hanako moved to the US at age 16 to pursue her education. While in the US, she took a renewed interest in her cultural roots, especially the Japanese food culture, and decided to return home to to learn pottery from her father, Takashi Nakazato. Since her debut exhibition at Manyodo Gallery in Tokyo, in 2000, she has shown her work extensively in Japan and the US. In 2007, she established her studio monohanako in Karatsu, Japan. In 2010, she established another studio monohanakowest in Union, ME. She currently divides her time between Japan and the US.