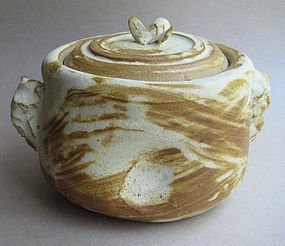 Mizusashi, Fresh Water Jar for Tea Ceremony. Also, Lidded jar for any storage use. Bamboo Ash Glaze. Lid Knob in shape or Orchid Flower. By Sachiko Furuya; Honolulu, HI. H. 4.875"(12cm) x Dia. 5.75"(14.5cm.) Volume = 1,000ml, approx 32 oz. Earlier piece of Furuya's, ca. 2005, when she was still in the Seattle, WA area. Sachiko Furuya hails from Yamanashi Prefecture, Japan. There, she studied pottery with Yukio Matsuura, making primarily tea wares for practitioners of the Omotesenke School of Tea. She also attended the College of Arts at Nihon University (Tokyo,) Suidobara Fine Arts Academy (Tokyo,) and has a Studio Art degree from Clark College in Dubuque, Iowa. She has exhibited her work in galleries and museums in the United States and Japan. She also owned and operated her own gallery in Edmonds, WA from 1997-2000. Currently, she resides in Hawaii, where she finds new inspirations to complement her aesthetic sensibilities cultivated by her time in Japan and the Pacific Northwest. Sachiko's pottery glazes often make use of bamboo ash (J. take bai) and a high iron content. Her forms tend to be raw and organic, illustrating her preference to let the materials speak for themselves.