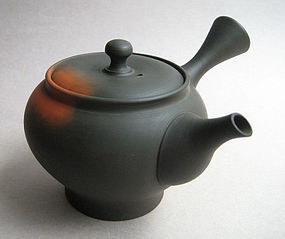 Tokoname Yohen Kyusu (Side-handle Tea Pot,) Murata Yoshiki. H. 3.5”(9cm) x Body Dia. 3.5”(9cm) x W.(including handle) 5.375”(13.5cm.) Volume = 320cc(10oz.) Below the spout it is stamped “yoshiki” (see enlargement #6.) Murata Yoshiki was born in 1950 and is a Tokoname potter who apprenticed under Ito Toji. His works are a good example of the long history of sencha tea wares produced in the town of Tokoname, in Aichi Prefecture. It is perfectly balanced and well suited for use in preparing high quality Japanese tea. This pot displays some color change in firing as referred to by the term “yohen” (literally, changed by the fire.”) This natural decoration adds a warming element to the austere simplicity of the piece. Tokaname has a pottery history going back around 1,000 years. During the Kamakura Era (1185-1333,) it is said that there were over 3,000 kilns in the region. However, it was in the early-1800’s that tea pot came to be made in Tokoname. It was in the 19th Century when the drinking of sencha experienced a huge rise in popularity in Japan, especially in the Imperial Capitol of Kyoto. Imported Chinese wares had long been the favored utensils for tea preparation. In 1854, iron-rich natural red clay similar to that of the famous Chinese Yi Xing tea wares was discovered in Tokoname and the first red clay tea pot was made by Jyumon Sugie using techniques from Yi Xing. Since then, red clay Tokoname tea pots have been an industry standard among Japanese tea pots due to the clay’s ability to retain heat and impart taste. Even today, it is probably not much of an exaggeration to say that there is an average of one Tokoname kyusu per Japanese household. These range from factory produced mold-made wares, to artist-made individual pieces like this one.