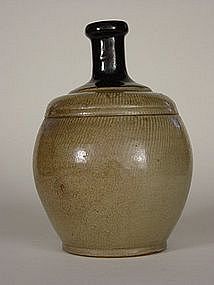 Please refer to our stock # YA-8 when inquiring.
Click to view additional online photographs

Sake Flask, "tokkuri," Meiji Era (1868-1912) from Mashiko, Tochigi Prefecture. H.10", Body Dia.6". This early Mashiko ware shows the "tobi kanna" technique of chatter marking around the body. In Meiji-era Mashiko, this patterned flask was called a "matsu-kawa-tokkuri" (pine-skin-tokkuri.) A rich, dark brown glaze decorates the neck. Similar wares were also produced around the same time in Fukushima Prefecture. Today, chatter marked wares, such as plates from Onta (Oita Prefecture) are the probably the best known. Tokkuri were standard wares for transporting and selling sake, contrary to how the term is used today as a smaller item for warming & serving sake. Basically, it was the "bottle" in the days before glass. A good example of mingei pottery that has been replaced by a more convenient medium.