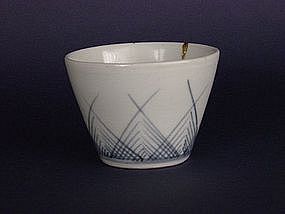 Please refer to our stock # YA-4 when inquiring.
Click to view online photographs

Imari ware soba choko (soba noodle dipping cup) from the mid-late Edo period (1600-1868.) Porcelain with underglaze cobalt blue painting of "takenoko" bamboo shoot pattern. H.5.5cm(2.17") x Dia.7.5cm(2.95"). A crack in the rim has been repaired using synthetic gold and lacquer. Soba choko were originally used for small morsels of food much like the mukozuke is used in today's Japanese place setting. It was not until later in the Edo Period that they were made specifically for use as noodle dipping cups, as "soba" noodles became a popular urban dish.