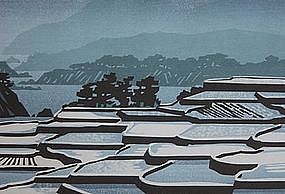 Clifton Karhu Woodblock Print. Matted & Framed. "Snow at Tango Cho", 1980. Print #9 of edition of 100. Print Image Size: H.10.375" x W.26.75". Frame Size: H.16.125" x W.32.75" Print and framing in excellent condition. Low print number of edition. A lovely view of snow covered, terraced fields along a rocky sea coast. Karhu masterfully uses varying hues of indigo to capture the subtleties of the scene; mist shrouded mountains in the background, and reflections of water and snow on the terraced fields on a hill atop a seaside cliff. The technique is reminiscient of the "aizuri-e", blue prints, of the late 18th and early 19th centuries in Japan. Interestingly, Karhu also adds small touches of green and brown in the foliage and cliff face, in the image's lower left-hand corner. Clifton Karhu was born in Duluth, Minnesota in 1927. His early experience in Japan was as an American soldier, stationed at Sasebo from 1946 to 1948; then later as a missionary for the Lutheran Church from 1952 to 1958. In between, back home in the U.S., he attended the Minneapolis School of Art from 1950 to 1952. His home has long been Japan, specifically Kyoto, where he lived since 1963. After leaving missionary work and returning to the arts in 1958, he painted and sketched while living in Gifu Prefecture and had his first exhibition there in 1961. Woodblock printing has been his mainstay since moving to Kyoto, where he has built a strong reputation in the Japanese art community. He has also exhibited widely throughout Japan, the U.S. and Europe. He enjoys somewhat of a celebrity status in Kyoto, where he often described as “more Japanese than a Japanese,” often seen wearing kimono and living the life of a traditional Japanese artist. Inspiration for his works often come from his immediate surroundings, showing local architecture and landscapes; old houses, streets, temples, and the like. Considerable biographical and exhibit information is available on the web and a recent retrospective of his work, “Karhu @ 77: A Tribute" was published by Norman Tolman of the Tolman Collection in Tokyo, who has long been a leading representative of Karhu’s work in Japan. His recent passing on March 24, 2007 was a great loss to the Japanese print world. A link to an obituary in the Minneapolis-St. Paul Star Tribune in his birth state of Minnesota can be found here: http://www.startribune.com/466/story/1083623.html