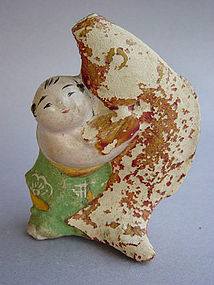 Tsuchi Ningyo, Clay Doll. Kintaro with Giant Carp. ca. early 1900's. H.4.25"(11cm) x W.3.375"(8.5cm.) Signed on bottom "Yano." Body is 100% intact and in good condition, but most of the paint has flaked off of the fish. The origins of this doll are unknown, as clay dolls were produced all over Japan since the early Edo period (1600-1868.) Most were influenced by the Fushimi Dolls made in Kyoto, and large production was even made in the far Northeast of the Tohoku region (such as Tsutsumi, Miyagi Pref; Hanamaki, Iwate Pref; and Yokote & Yabase in Akita Pref. The workmanship on this doll reminds me most of that of Hanamaki or Sadohara in Miyazaki Pref (Kyushu.) The theme is the mountain boy folk hero, Kintaro, holding a giant carp, a symbol of masculinity and perserverance.