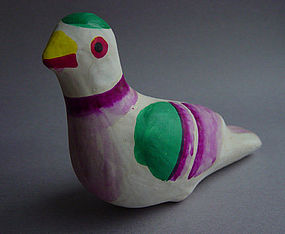 Hirosaki Hato Bue, Clay Pigeon Whistle from Hirosaki, Aomori Prefecture. Painted clay; L.6"(15cm) x H.4"(10cm) x 2.5"(6.5cm.)ca. 1970's. Condition very good, small paint chip on left eye (see enlargement #3.) The hato bue has been a popular folk toy of Aomori, and other regions of Japan, since the Edo Period (1600-1868.) In particular, it is said that the fuedal lord of the Hirosaki district allowed local roof tile- making potters to use the fuedal kilns to make additional functional wares and folk toys for themselves. This was the beginning of the clay pigeon whistle. Other folk lore says that children were made to play with the whistles to calm them and also that licking clay was thought to prevent worms. The whistle was made in a variety of sizes as well and this is a large one.