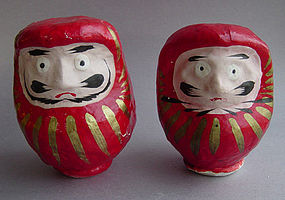 Paper mache Daruma Dolls from Tamashima district of Kurashiki in Okayama Prefecture by Ono Ichi, ca. 1972. Pair or single, smaller (FI-8b): H. 4.875"(12.2cm) x W.3.5"(9cm.); larger (FI-8a): H.5.25"(13.25cm) x W.3.375"(8.5cm.) Painted paper mache. These dolls were made in 11 sizes ranging from 11 - 45cm. The small one here is the second smallest size made, known as "9-go", and the larger is an "8-go" size. Condition notes: The larger Daruma is intact but there are cracks in the paper and a number of spots where the paint has chipped. It has "well-used charm." The eyes are also painted in already on both. They are vintage collectibles, not new items ready for use. Please see enlargement images. The legend of this particular Daruma is that the the famous Soto Zen Priest (poet & scholar as well,) Ryokan, stayed at Entsuji Temple in Tamashima in the late Edo Period (1600-1868.) Ryokan started the practice of producing these items for the temple and it has been a local artisan craft ever since. The Tamashima Daruma of Okayama is one of the more famous Daruma made in Japan. The legend of Daruma: Daruma is Boddhidharma, the patron saint of Zen Buddhism. His famous story of meditating in a cave until his legs atrophied gave rise to the self-righting Daruma doll in Japan. With no legs, you knock it over & it pops back up. Daruma also became so angered at himself for falling asleep during meditation that he cut off his eyelids. Daruma dolls also have no eyes, until painted in by user (one to begin a task, the other when finished.) This symbol of perserverance is common everywhere in Japan today; businesses, homes, schools, no individual or organization is immune from having these dolls in their life at least once. They are a great example of how folk lore and folk craft still retain their place in modern Japanese life and culture.