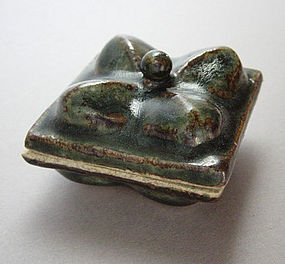 Kogo (Incense Container) by Kawai Takeichi; Kyoto, 1972. Dark green glaze. 2.25"(5.75cm) square x 1.75"(4cm) high. This piece was acquired on a visit to the Kawai pottery on August 9, 1972 and has had one owner since then. Kawai Takeichi (1908-1989) is the nephew of legendary Mingei (Folk Craft) Movement potter Kawai Kanjiro (1890-1966;) who along with Yanagi Soetsu, Hamada Shoji, Bernard Leach, and others were the first-generation leaders of this movement. Kawai Takeichi began his apprecticeship with his uncle in 1927 and his work clearly shows the influence of Kanjiro's style. Forms and glaze combinations relect the distinct artist-artisan nature of Kawai pots. This kogo is designed for use as an incense container placed in the tokonoma during the tea ceremony, but can function as any kind of simple, yet elegant, lidded container. Kawai Takeichi's work has been widely exhibited throughout Japan and he was also was active in exhibitions in Australia. His son, Kawai Touru (b. 1941) and grandson, Akiteru (b. 1975,) currently continue the Kawai pottery heritage founded by Kawai Kanjiro in the Higashiyama District of Kyoto.